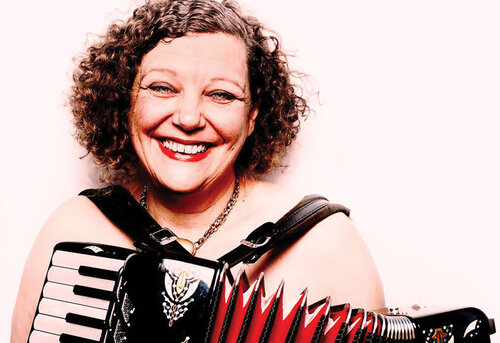 This Jewish Community Library program will be happening virtually. Go to https://forms.gle/SA4CXP6d2ftk2yso8 to sign up and receive a Zoom invitation.

The Broderzingers—wandering Yiddish bards who crisscrossed Eastern Europe at the end of the nineteenth century, singing bawdy satirical songs in taverns, wine gardens, cellars and parties—did as much as any formal philosopher to spread the Jewish Enlightenment values of rational thought, universal education, social equality, and a good laugh. The cultural conflict between Haskalah and Hasidism was as hotly fought as any current culture war, and the Broderzingers used every comic weapon to win their points—from dressing up in primitive drag (including one performer who sang disguised in a goatskin!) to mocking authority figures of the day, including tsars, priests, and rabbis. Several serious Yiddish writers toured with the Broderzingers.

Yiddishist, singer, and accordionist Jeanette Lewicki presents her own lively take on the subject, featuring her translations from the Leksikon fun Yidishn Teater, the writings of badkhen Shloyme Pryzament, and early 78 rpm recordings by Broderzingers such as Pepi Litman. Based on a presentation commissioned by Yiddish New York, with sponsorship from the Arbeter Ring of Northern California, this modern magic-lantern show will include vivid images, rousing music, and live performance.

Jeanette Lewicki’s devotion to Yiddish song has led her to work with some of the foremost klezmer musicians and Yiddishists of our time, including Brave Old World, the Klezmatics, Arkady Gendler, and Michael Alpert. She has produced numerous recordings, sung at a thousand weddings, coached Michael Tilson Thomas in Yiddish, and helped digitize the complete Ruth Rubin collection hosted at YIVO of more than nine hundred unaccompanied Yiddish songs sung by native speakers.

Co-presented by KlezCalifornia and the Workers Circle/Arbeter Ring of Northern California.

The Great Kosher Meat War of 1902 tells the twin stories of uneducated but deeply observant female immigrants who discover their collective power as consumers, and of the Midwestern meatpacking cartel that conspired to keep prices high. Anticipating both the consumer movement and contemporary Jewish activism, these women organized themselves into a potent fighting force.

Introducing a year-long series for youth professionals to fuel your engagement work. Join colleagues both familiar and new every on the first Thursday of each month for free workshops and expert-led sessions.

Your ticket for the: VIRTUAL PROGRAM: Roots of Yiddish Comedy: A presentation by Jeanette Lewicki