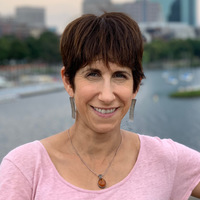 What is Judeo-Arabic and why is it so important to understanding Judaism today? What we know today as “the Jewish bookshelf” was strongly shaped by an enormous body of texts written in Judeo-Arabic, approximately between the tenth and thirteenth centuries.  Professor Goldstein will introduce the Judeo-Arabic language and what was written in it, laying out the massive linguistic, literary, and cultural changes that the Jewish communities of the Middle East and Mediterranean experienced following the Islamic conquests of the seventh century CE and the spread of Arabic throughout the region.

Miriam Goldstein was born in Boston, Massachusetts, and studied at Harvard College and the University of Cambridge before completing her doctorate at the Hebrew University of Jerusalem in 2007. Her research focuses on medieval Judeo-Arabic literature and interreligious relations among Jews, Christians, and Muslims in the medieval Arabic-speaking world.  She is the author and editor of numerous books and articles on Arabic and Judeo-Arabic literature, and is currently finishing a book devoted to the Middle Eastern texts and contexts of the long-lived Jewish parody of the life of Jesus, Toledot Yeshu. She has been a faculty member of the department of Arabic language and literature of the Hebrew University of Jerusalem since 2010.

Program made possible, in part, by Tricia Hellman Gibbs.

Co-presented by JIMENA: Jews Indigeneous to the Middle East and North Africa.

Register for Event: How Judeo-Arabic Literature and Culture Shaped Judaism as We Know It (VIRTUAL)

Your ticket for the: How Judeo-Arabic Literature and Culture Shaped Judaism as We Know It (VIRTUAL)