Ukraine in Jewish Imagination and Reality 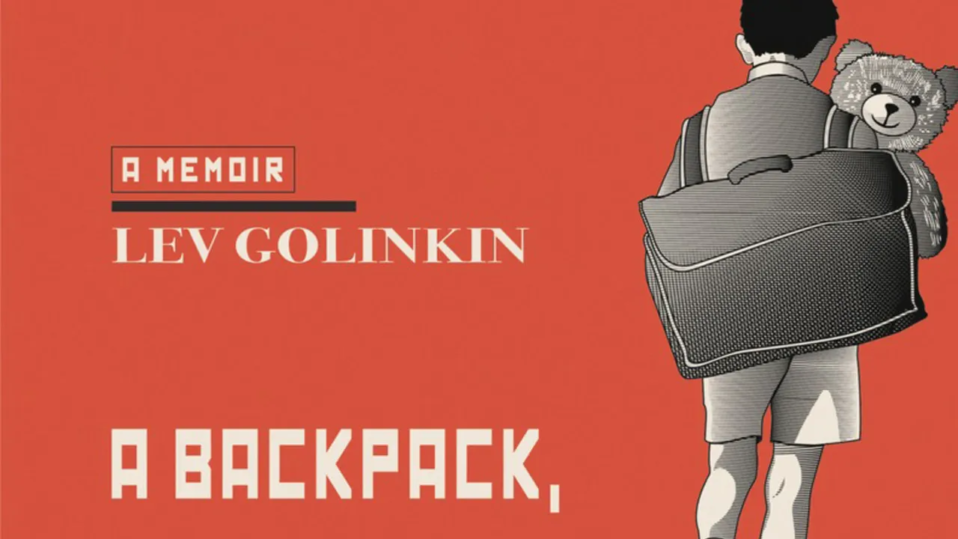 Thoughts of Ukraine consume me these days. Even though my grandmother and her siblings fled pogrom-weary Pavoloch between 1903 and 1905, like many of you with similar ancestry, I feel the tug of post-traumatic nostalgia mingled with empathetic horror at Putin’s terror. To help me navigate current complexities with deeper appreciation and understanding, I’ve immersed myself in the library’s significant collection of Jewish Ukraine content — from fiction, fantasy, and graphic novels to history, politics, and memoir.

I encountered this intriguing little gem on the shelf: Lenin’s Jewish Question, by Yohanan Petrovsky-Shtern. Turns out the Jewish, irreverent (and disreputable) great-grandfather of Russia’s Bolshevik revolutionary came from a fractious shtetl not far from Zhitomir. The town — and the great-grandfather — embodied many of the truthful elements embedded in Jonathan Safran Foer’s Ukraine shtetl fantasy, Everything is Illuminated.

Safran Foer sought to encounter his maternal roots in Trochenbrod, northeast of Lviv.  Finding no physical trace of the formerly vibrant, entirely Jewish town, Illuminated uproariously riffs on what might have been. Esther Safran Foer’s delightful I Want You to Know We’re Still Here: A Post-Holocaust Memoir reveals the heart and soul of the family’s living connection to the real Tochenbrod, past and present. In a more objective portrayal, The Heavens Are Empty: Discovering the Lost Town of Trochenbrod, Avrom Bendavid-Val explores the community’s unique beginnings through its tragic annihilation.

Looking for your own shtetl roots? The Library collection features hundreds of books, videos, and sound recordings on the shtetl experience, including the two all-important shtetl locator guides: Shtetl Finder: Jewish Communities in the 19th and early 20th Centuries in the Pale of Settlement of Russia and Poland, and in Lithuania, Latvia, Galicia, and Bukovina, and with Names of Residents, by Chester G. Cohen and Where Once We Walked: A Guide to the Jewish Communities Destroyed in the Holocaust, by Gary Mokotoff and Sallya Amdur Sack. 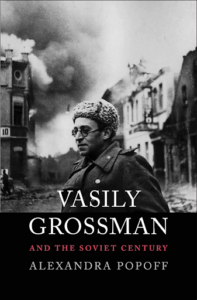 Ukraine’s politically unsettled Jewish history comes alive in Berdychiv-born journalist Vasily Grossman’s newly recovered writings, originally suppressed by Stalin. His primal connection with Judaism appears in his choice of subject matter, his perspective and insights, and ultimately, how he is  perceived by his readers, editors, and Party functionaries. Alexandra Popoff’s meticulously researched Vasily Grossman and the Soviet Century spans his creative life, adding context, personality, and depth to Ukrainian Jewish history.  The section on Grossman’s lasting relationship to the mineral-rich Donbas region, Ukraine’s crucial center for mining and manufacturing, is particularly relevant today. Also check out The Bones of Berdichev: The Life and Fate of Vasily Grossman, by John and Carol Garrard. The Library has several of Grossman’s works in translation, including his long-suppressed Life and Fate, plus Everything Flows, A Writer at War: Vasily Grossman with the Red Army, 1941-1945, and The Road: Stories, Journalism and Essays. 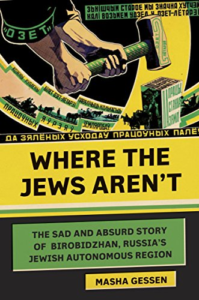 Parallel to Grossman’s timeline is the unspeakable horror of the Holodomor, Russia’s 1932-33 calculated starvation and destruction of food-producing communities throughout Ukraine’s agricultural heartland. In Red Famine: Stalin’s War on Ukraine, Russia scholar Anne Applebaum concludes nearly two-thirds of the five million people who died in this collectivization nightmare were starved deliberately. Countless Jewish families perished, even as Soviet citizens blamed the food shortages on “Jews” in Stalin’s government. Creation of a “Jewish homeland” near the China-Siberia border offered something of an alternative. In Where the Jews Aren’t: The Sad and Absurd Story of Birobidzhan, Russia’s Autonomous Region, journalist Masha Gessen chronicles the strange, fraught, and haunting backstory of this Soviet solution to the Jewish question. Ironically, perhaps: The Jews who left Ukraine and other territories within the USSR for the isolation and deprivation of Birobidzhan escaped Hitler’s menace.

Throughout the Soviet period, “Zhid” (Jew) remained a pejorative epithet, reflecting the “Yevrei” nationality stamped into internal passports declaring an unfavored people without a homeland. Well into the Brezhnev era, Ukrainian Jews feared for their personal safety and employment security. The 1970s-1980s movement to free Soviet Jews heightened worldwide awareness of their plight, pushed for emmigration rights, and established NGO structures worldwide for getting Jews out. 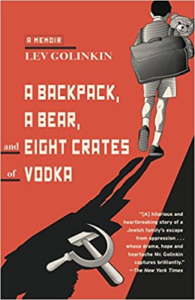 Then, as now, the Hebrew Immigrant Aid Society and the Jewish American Joint Distribution Committee were on the ground, assisting refugees through the complex, challenging and disorienting logistics of emigration. They are institutional characters in several poignant and gripping portraits of Ukrainian families caught in this cataclysmic shift. Lev Golinkin’s brilliantly tragic-hilarious Backpack, A Bear, and Eight Crates of Vodka, underscores the lifelong trauma carried by survivors of state-sanctioned, endemic antisemitic brutality.  His memoir is so much more than his psychic baggage, chronicling his family’s outrageously comic and appalling adventures from applying to leave Kharkiv, to a brutally thuggish border crossing, through navigating Vienna’s chaotic refugee situation, to parsing bewildering late-1970s American attitudes and expectations. 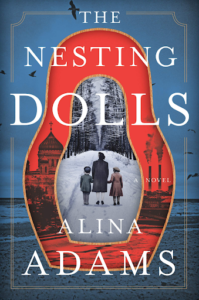 Alina Adams enfolds four generations of Odessa Jewish women’s challenges and choices into The Nesting Dolls, a beautiful if heartbreaking novel about love, endurance, leaving and returning to a new appreciation of oneself, family and community.

These themes also underscore the life story of Ukraine-born, American patriot Alexander Vindman. The fictional women of Nesting Dolls settled in 1970s Brighton Beach, the tightly homogeneous Brooklyn neighborhood of Ukrainian Jewish exiles, where Vindman’s real family found a welcoming community. He and his twin brother were four years old when their family fled Ukraine; they grew up roaming freely, discovering their strengths and limitations as Americans. (In contrast, Lev Golinkin’s family knew about Brighton Beach and purposely chose to live elsewhere, to escape the insular claustrophobia of Ukrainian Jewish life in America.) Vindman candidly reflects on the lifetime of choices and beliefs leading to his decision to report President Trump’s “perfect” phone call extorting Ukrainian President Volodymyr Zelensky in July 2020. 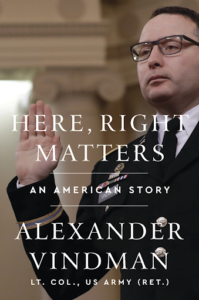 As news reports foreshadowed, the consequences of that ethical imperative ended his distinguished military career and remain with him still. Regardless, he affirms in Here, Right Matters, given a second chance, he wouldn’t do anything different.

Your ticket for the: Ukraine in Jewish Imagination and Reality

Ukraine in Jewish Imagination and Reality