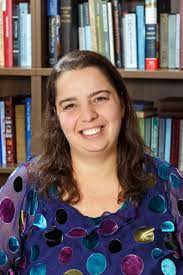 During World War II, Kiev-based ethnomusicologist Moisei Beregovski and his colleagues collected songs that were being composed in Yiddish by Soviet Jews in response to the War and the German occupation of Ukraine. In 1950, before he had been able to publish these materials, Beregovski was arrested and imprisoned for Jewish nationalism during one of Stalin’s crackdowns, and all of his materials were thought lost. But this collection of songs in fact survived, languishing in obscurity until it was uncovered by librarians in the basement of the Vernadsky Ukrainian National Library in Kiev. Alerted to their discovery, Anna Shternshis spent years studying this unique trove of materials. In this presentation, Shternshis will tell the story behind this unique collection and offer an analysis of selected songs, which include some of the first eyewitness accounts of the Holocaust in the Soviet Union.

Anna Shternshis is the Al and Malka Green Professor of Yiddish studies and director of the Anne Tanenbaum Centre for Jewish Studies at the University of Toronto. She received her doctoral degree from Oxford University in 2001. Shternshis is the author of Soviet and Kosher: Jewish Popular Culture in the Soviet Union, 1923–1939 (Indiana University Press, 2006) and When Sonia Met Boris: An Oral History of Jewish Life under Stalin (Oxford University Press, 2017). Together with artist Psoy Korolenko, Shternshis created and directed the Grammy-nominated Yiddish Glory project, an initiative that brought back to life forgotten Yiddish music written during the Holocaust in the Soviet Union. A recipient of a 2020 Guggenheim Fellowship, she is currently working on a book tentatively titled Last Yiddish Heroes: A Lost and Found Archive of the Holocaust in the Soviet Union about Yiddish music created in Nazi-occupied Ukraine.

Register for Event: The Lost Soviet Yiddish Songs of the Holocaust (VIRTUAL)

Your ticket for the: The Lost Soviet Yiddish Songs of the Holocaust (VIRTUAL)