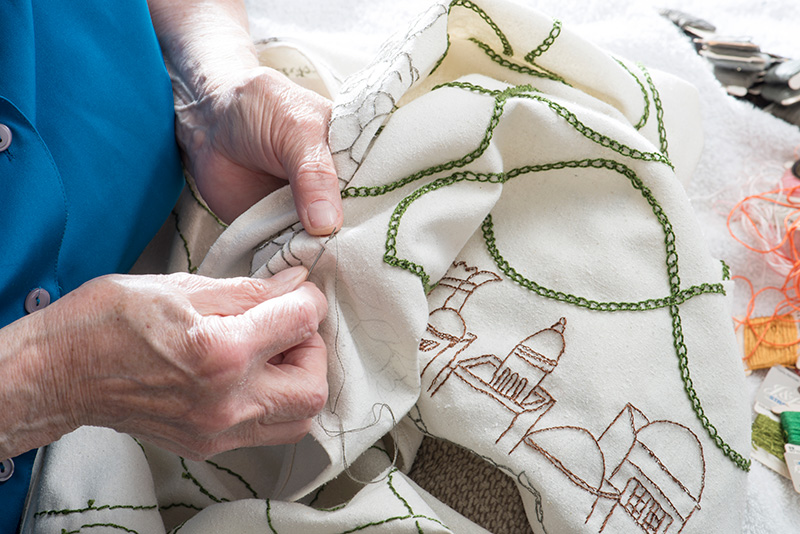 A child survivor of the Holocaust, Trudie Strobel settled in California, raising a family and never discussing the horrors she witnessed until the trauma of her youth triggered a paralyzing depression. A therapist suggested that Trudie attempt to draw the memories that haunted her, and she did—but with needle and thread instead of a pencil. Resurrecting the Yemenite stitches of her ancestors, and using the skills taught by her mother, whose master seamstress talent saved their lives in the camps, Trudie began by stitching vast tableaus of her dark and personal memories of the Holocaust. What began as therapy exploded into works of art, from narrative tapestries of Jewish history rendered in exacting detail to portraits of remarkable likeness. Many of her works are now in public and private collections.

Stitched & Sewn: The Life-Saving Art of Holocaust Survivor Trudie Strobel is the story of Strobel’s life and work. Trudie Strobel will join us along with her biographer, Jody Savin, and the curator of a new series of exhibitions of Trudie’s tapestry work, Maya Savin Miller.

Author Jody Savin is a graduate of Princeton University and the American Film Institute, where she earned her M.F.A. She was a musical director for the soap operas The Guiding Light and As the World Turns, winning three Daytime Emmy nominations. As a screenwriter, Savin wrote the award-winning TNT documentary Chico Mendes: Voice of the Amazon, and she wrote, produced, and distributed the independent films Bottle Shock, Nobel Son, and CBGB.  She has also written and produced feature films for Disney, Universal, Columbia, and 20th Century Fox. She lives in Pasadena, California.

A rising senior at Polytechnic School in Pasadena, California, Maya Savin Miller is a nationally recognized debater and a member of the editorial staff of jGirls Magazine. She is a member of the Los Angeles Service Academy and co-president of her high school’s Jewish Student Union. Her prose and poetry have been published in numerous magazines and her story “Trudie’s Goose” has been adapted to film by award-winning Israeli filmmaker Liran Kapel. Founding and curating A Life In Tapestry has been one of the greatest joys and most rewarding learning experiences of her life.

Co-presented by the JFCS Holocaust Center.

Thanks to Paul’s leadership, our Bay Area community has been immensely enriched by dozens of LGBTQ people and allies who have chosen Judaism. Paul dedicated a huge part of his lay leadership to San Francisco’s historic LGBTQ synagogue, Congregation Sha'ar Zahav, he was also a former board member of Jewish LearningWorks, and a beloved mentor to some of our staff. #wemissyou #wearebetterbecauseofyou #jewisheducators ... See MoreSee Less

This summer, we want to invite you to use some of your time away from work or play to form a chevruta, and give yourself the opportunity to relax your body and your mind (you can do this!), and take action by inviting someone to discuss and learn with you about connectedness and self-fulfillment. Chevruta means “friendship” (in Aramaic) and is the term used in Jewish tradition for text that is studied in pairs. So surprise a personal friend, a colleague or your partner with this invitation! You can meet in person (by a pool or on a hike) or online, and don’t worry about the content or method because we wrote a step-by-step guide for you. Our promise is growth for both of you!#HappySummer2022 #keeplearningandgrowing ... See MoreSee Less
View on Facebook
· Share

Your ticket for the: Stitched & Sewn: The Life-Saving Art of Holocaust Survivor Trudie Strobel