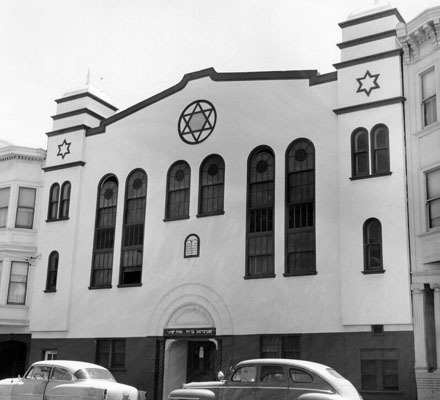 Built in 1908, the former synagogue building on 19th Street in the Mission District is a San Francisco landmark that has continued to fascinate visitors and residents. In addition to being the home of Congregation B’nai David for seventy years, it featured what was for many years the only mikvah in Northern California. Doron Shapira, whose father was the synagogue’s last executive director before its closure in 1978, will share memories of growing up in a congregation that lives on only in memory.

This portion will be followed by a pictorial survey of additional synagogues that were once part of San Francisco’s Jewish landscape, but no longer exist. There will also be opportunity for attendees to share recollections.

Born in Israel and raised in San Francisco, Doron Shapira has been the cantor at Peninsula Sinai Congregation in Foster City since 1994.

Howard Freedman is the director of the Jewish Community Library.

Program made possible, in part, by Allison Green.

Your ticket for the: Congregation B’nai David and the Vanished Synagogues of San Francisco (VIRTUAL)