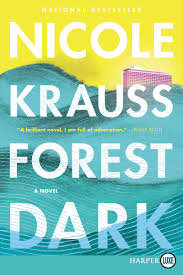 This hybrid work of fiction, memoir and literary criticism alternates between two distinct stories about two Americans who travel to Tel Aviv searching for something they cannot articulate: a New York lawyer named Epstein in the final stages of giving away his fortune; a critically acclaimed American novelist named Nicole, suffering a mixture of writer’s block, insomnia and restlessness.

Your ticket for the: Nicole Krauss: Forest Dark