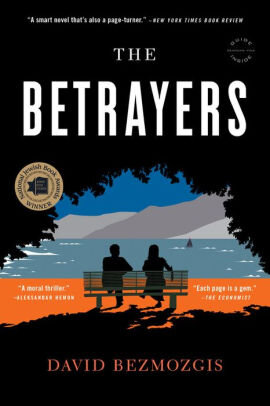 The novel pans one momentous day in the life of powerful Israeli politician Baruch Kotler, a former Soviet refusenik. Fleeing to the Crimea in the wake of political pressure and blackmail, he unexpectedly comes face to face with the man who denounced him to the KGB forty years earlier.  Evoking biblical themes while casting attention to the plight of Jews in both Israel and Ukraine, The Betrayers poses profound questions about ethics and forgiveness.

Reading group guide and a conversation with David Bezmozgis, produced by Little, Brown and Company

The Novel as Writerly Returning: a response to The Betrayers by Rabbi Aubrey L. Glazer of Congregation Beth Sholom, San Francisco

The Financial Times by Amy Waldman

The Guardian by Marcel Theroux

The Independent by Barry Forshaw

The Jewish Chronicle by David Herman

The Oregonian by Alexis Burling

The Times of Israel by Renee Ghert-Zand

The Toronto Star by Emily Donaldson

Articles by David Bezmozgis and interviews about The Betrayers

The Novel in Real Time by David Bezmozgis in The New Yorker, March 2014

Interview with David Bezmozgis in The Observer, August 2014

Interview with David Bezmozgis in The Toronto Star, September 2014

The End of Jewish American Literature, Again in Tablet, September 2014

For David Bezmozgis, Fiction Must Go Far Beneath the Surface by Gal Beckerman in The Forward, October 2014

Before Crimea Was an Ethnic Russian Stronghold, It Was a Potential Jewish Homeland in Tablet, by Jeffrey Veidlinger, March 2014

Crimea’s Sole Rabbi Advises Jews ‘Not to Become Targets’ in The Times of Israel, March 2014

The Russification of Jewish-American Fiction by Andrew Furman, in Zeek, April 2008

The Ancestral Faith, With a Side of Salami by Boris Fishman in The Forward, October 2004

The Year of the Former Soviet Author by Yevgeniya Traps in The Forward, December 2014

Ask the Rabbis on forgiveness from Moment Magazine

The Batsheba Syndrome: The Ethical Failure of Successful Leaders by Dean Ludwig and Clinton Longenecker

Your ticket for the: David Bezmozgis: The Betrayers