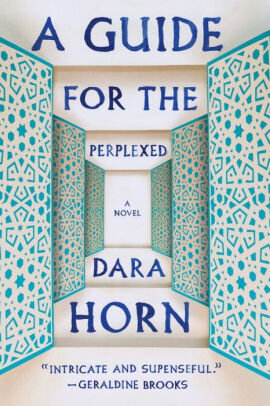 After Josie Ashkenazi develops Genizah, a digital archive that collects and organizes every single moment of the user’s life, her sister Judith persuades her to take leave of her devoted husband, inquisitive daughter, and thriving business to accept a brief consulting gig in Egypt. Interwoven are episodes from the lives of Solomon Schechter, a 19th century professor obsessed with uncovering the repository of sacred Hebrew texts, and the scholar and physician Maimonides, forcing cutting-edge technology to intersect with ancient questions about fate and free will, family and destiny.

Reading guide with discussion questions from the Jewish Community Library

Essays by Bay Area Jewish educators in response to A Guide to the Perplexed:

Video of Dara Horn’s appearance at Politics and Prose Bookstore in Washington, D.C., 9/30/13

Video of discussion of A Guide for the Perplexed led by Rabbi Menachem Creditor at Congregation Netivot Shalom in Berkeley, 11/15/13

The Times of Israel by Renee Ghert-Zand

“When We Save Every Memory, We Forget Which Ones Are Special“ by Dara Horn in The Washington Post (September 19, 2013)

“Jews and Memory: How Judaism Perpetuates Memory And Activates Our Neural Networks: An Interview with Joshua Foer” in Moment Magazine (May/June 2011)

“Living a Life That Matters Through Selective Memory“  by Rabbi Edward C. Bernstein (includes discussion of A Guide for the Perplexed) (September 5, 2013)

Memory in the YIVO Encyclopedia of Jewish in Eastern Europe

“The Favored Child  by Adriane Leveen in The Jewish Week

Taylor-Schechter Genizah Research Unit at Cambridge University, including their fascinating fragment of the month

“Treasures in the Wall” by Emily Greenhouse in The New Yorker (March 1, 2013)

“Hidden Treasures of the Cairo Genizah“ by Joel Shurkin in The Jewish Daily Forward (November 18, 2011)

Maimonides’ Philosophy in the Stanford Encyclopedia of Philosophy

“Perplexed by Maimonides?” in the Jewish Daily Forward (February 4, 2014)

“The Visionary: A Digital Pioneer Questions What Technology Has Wrought” by Jennifer Kahn in The New Yorker (July 11, 2011)

“Will Google Glass Help Us Remember Too Well?” by Philip Berne in Slashgear (June 30, 2012)

Your ticket for the: Dara Horn: A Guide for the Perplexed