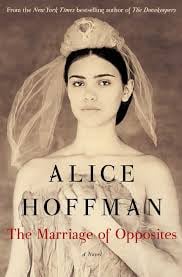 Your ticket for the: Alice Hoffman: Marriage of Opposites